German and Austrian surnames are not well-known for being short.  Today’s main character is an exception.  Today’s birthday boy, who would have been 150 years old today, was John Putz.  He was born on April 29, 1870, the son of Joseph and Josepha (Reisenbichler) Putz.  John’s father had arrived in America in 1858 with several other people who settled around Pocahontas, Missouri.  This passenger list includes the names Reisenbichler, Kieninger, Putz, and Pilz.

John’s father, Joseph Putz had an amazing story himself, but I will have to tell that one some other day.  One notable fact is that Joseph Putz was one of the founders of St. John’s Lutheran Church in Pocahontas.  John Putz was one of the children born to Joseph’s second wife, Josepha, and he was baptized at St. John’s.  John can be found as an infant in the 1870 census for Shawnee Township.

John can next be found in the 1880 census as a 10 year-old.  There is evidence here that John’s mother, Josepha, had been previously married to John Kain.  A child from that marriage was living in this household.

Let’s turn our attention to John’s future wife, Selma Koenig.  She was born on June 24, 1875, the daughter of Zacharias and Marianne (Ackermann) Koenig.  She was also baptized at St. John’s Lutheran Church in Pocahontas.  The first census in which Selma can be found was the one taken in 1880.

John Putz married Selma Koenig on October 29, 1893 at St. John’s.  Our German Family Tree shows this couple having 10 children, all baptized at St. John’s.  However, in a newspaper story written by his good friend, Rev. Walter Keister, who was pastor at St. Paul’s Lutheran Church in Jackson, Missouri, it says there were 13 children in all.  The Putz’s had transfered to St. Paul’s, and it is likely that some children were baptized there.  We do not have records for that congregation.  Several of those children died in infancy.

We find the following Putz household in the 1900 census.  At this point in his life, John was a farmer, and had a 76 year-old widower, Joseph Wallmann, helping him on his farm.

In a family history and newspaper articles written about him, we find that during his time living in Pocahontas, John was employed at Neely’s Landing where he was involved with shipping interests on the Mississippi River.  He also had experience as a flour miller and a lumberjack.  He worked for a while in a general store in the town of Pocahontas.  He would also become the first town clerk for Pocahontas when it was incorporated in 1893.  Not only that, but he was also the organist and choir director at St. John’s.

In November of 1904, John Putz was elected to be Treasurer for Cape Girardeau County.  That precipitated his move from Pocahontas to Jackson, Missouri.  That is where we find his household in the 1910 census.

When John gave up his position as Treasurer in 1913, this short accolade was placed in a local newspaper.

I am guessing that the photo of John Putz below was taken while he was serving in the County government.

After his terms as treasurer, John continued serving Cape Girardeau County in several other positions.  We find him shown as a Justice of the Peace and Recorder of Deeds in the 1920 census.

I should have been able to find John and Selma in the 1940 census, but the last one I could locate was the 1930 census.  He is called a department recorder for the county..

In 1943, John and Selma celebrated their 50th wedding anniversary, and this photo was taken.

John Putz died in 1945 at the age of 75.  We can view his death certificate which was signed by Dr. G.B. Schultz, another character whose story has been told on this blog.

Selma Putz died in 1956 at the age of 80.  Her death certificate says she died of pneumonia.

John and Selma Putz are buried back where their lives began, in the St. John’s Lutheran Cemetery in Pocahontas.

Among the several stories surrounding the life of John Putz is one that say for many years he had developed a dream in his head of a state park being established in Cape Girardeau County.  John had a real love for the outdoors and nature.  He even had the idea that such a park could be located in the beautiful forested hills near the Mississippi River.  He had become very familiar with the land through which the Cherokee Indians traveled at the same time the German Lutherans were making their trip up the Mississippi River in 1839.  John was known for promoting his ideas while writing articles for a local newspaper.  I also have discovered that John had a rather extensive pipe collection.  The title of this post implies that John had a pipe dream, but that was not the case.  He just had a lot of pipes and a dream.  John never realized that dream in his lifetime, but with a lot of other folks’ efforts, that dream became a reality when the voters approved a plan in 1956 to establish Trail of Tears State Park.

After his death, several newspaper articles were written about his life.  One is Rev. Kiester’s article mentioned earlier.  I will display two images of that article here.  It is cropped in such a way that you will not be able to read every word, but there are countless memories of John that can be gleaned from it.  You will find some real gems in this article. 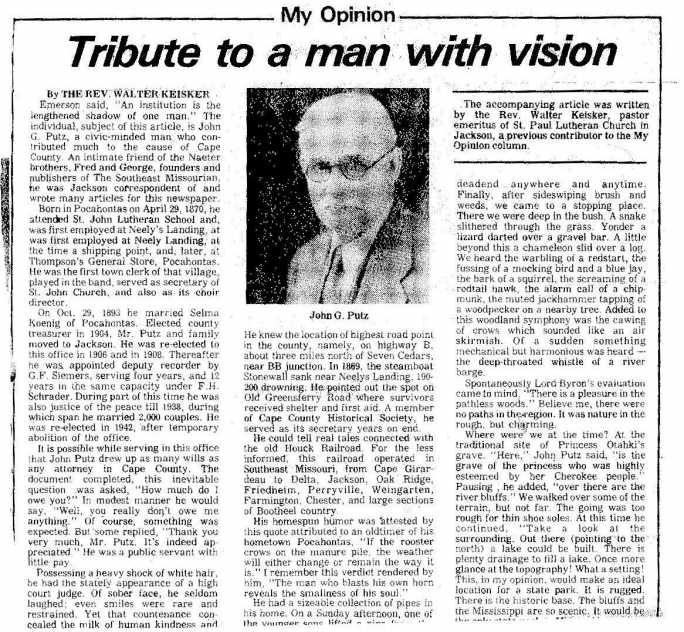 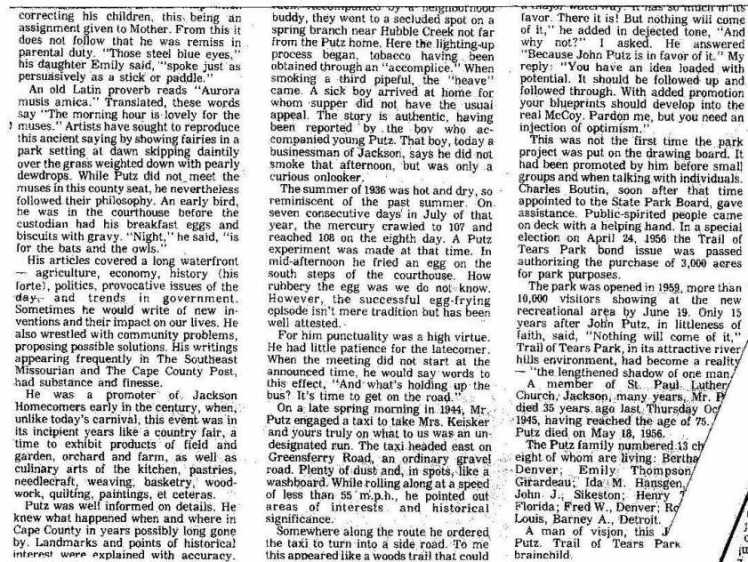 In another blog post written by Fred Lynch, we see the following excerpt from an earlier article concerning John Putz’s dream.

I find John Putz’s life story to be very inspiring.  He was a man of many interests and talents and was willing to use those qualities to make a difference.  I think we see a man who made contributions in three important areas…the private sector, the public sector, and the spiritual sector.