I almost always take a quick look when I am searching for a story to see if our German Family Tree includes anyone who would be celebrating a bicentennial birthday.  Every once in a while, I find one.  Today is one of those days.  Christiane Weber was born on June 8, 1820 in Germany, probably in the city of Planena.  You will read her story today.

I have already written several posts about people in Christiane’s extended Weber family as well as several in the family of her spouse, Heinrich Grother.  I suppose that is to be expected.  We now have posted over 1400 articles on this blog.  We were bound to hit these two families every once in a while.  Today, we get to spend some time on two of the families that were part of the Gesellschaft in 1839.

Christiane Weber was the daughter of Johann Christoph and Dorothea (Schenk) Weber.  The Weber family traveled to America aboard the Republik as part of the original Stephanites.  You have to look at several pages of the passenger list for that ship in order to find all the Weber’s.  The parents and their youngest child were found in the forecabin section of the ship, while the rest of them were in steerage.

Christiane is the 17 year-old in the middle image.  After traveling up the Mississippi River on the steamboat, Knickerbocker, this family was awaiting the colony’s journey to settle in Perry County when Johann Christoph died at the end of March.  Here is his death record which was included in the Trinity, Altenburg books.

So, when the Weber’s arrived in Perry County in May of 1839, Dorothea, a widow, was the head of the family.  I think I found the Weber family in the 1840 census for Perry County.  It just gives Frederick Weber as the head of the family with tally marks for the others.  I also think the family just below the Weber family was the Grother family.  On today’s date in 1840, Christiane would have had 20 candles on her birthday cake, but I doubt that happened.

Next, we will turn our attention to Christiane’s future husband.  Heinrich Grother was born on February 15, 1819.  We can take a look at his baptism record from a church in Worpsverde, Germany.

The above record says Heinrich’s parents were named Lutje and Anna.  The Grother family arrived in New Orleans in 1838 (before the Gesellschaft arrived) aboard the ship, Sophie.  Heinrich was 20 years old when he arrived.

The Grother family settled in St. Louis, but when the Stephanites arrived in 1839, they and a few other families that we refer to as the St. Louis Additions, decided to join the Gesellschaft and move to Perry County.

In 1843, Heinrich’s mother died, so when he was married on January 30, 1844, she was no longer alive.  Heinrich Grother married Christiane Weber at the church in Altenburg.  There actually wasn’t a church building in Altenburg yet, so either this wedding took place in their home or in the Loeber parsonage, where this congregation worshiped on the second floor of their home.  The church record from the Trinity, Altenburg books shows that just a few weeks later, Christiane’s brother, Friedrick Weber, married Regina Goethe.

We find the Grother couple in the 1850 census with 3 children.

When the split took place in the Trinity congregation in 1857 and Rev. Schieferdecker started Immanuel Lutheran Church on the other side of town, Heinrich Grother was a charter member.

The last census in which we find Heinrich was the one taken in 1860.  According to our German Family Tree, there were 6 children born into this family, but two of them died at a very early age.  So, you see all four of the other children in this census entry.

Heinrich served some time as a soldier in the Civil War.  Below is a record of his service.

Heinrich Grother died in 1868 at around 49 years of age.  There is a death record with his name in the Immanuel church records, but it contains no date of death or burial.  He was buried in the Immanuel Lutheran Cemetery, but, as you can see, his gravestone has a crack in it right where it would indicate his date of death.

The last census in which we find Christiane was the one taken in 1880.  Her son, John, had gotten married to Emilie Palisch, and that family was living in Christiane’s household.

Christiane died in 1890 at the age of 70.  I can display her death record from Perry County in two images.  The doctor who is shown on this document was Christiane’s brother-in-law, Dr. E.E. Buenger.  Dr. Buenger had married Amalia Weber.  This document says the cause of death was malaria fever.

We can also view the death record from the Immanuel Lutheran Church books.  It’s also in two images.

Christiane Grother is also buried in the Immanuel Lutheran Cemetery in Altenburg.

Christiane had another brother who was rather famous around here, Charles Weber.  He was a Civil War officer and held several government positions during his lifetime.  You can read his story in the post, Charles Weber x 2.  Also, I mentioned that one of the Grother children married a Palisch.  Actually, two of their children married Palisch’s.  We have plenty of Palisch descendants around here who should find this story to be of interest.

A concrete floor is being poured today at our museum’s new addition.  I took this video this morning.  The audio is rather annoying, so you may want to reduce the volume.

Here are a few still photos from this morning. 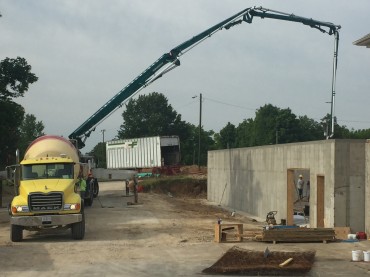 2 thoughts on “Christiane Gets 200 Candles”