Not long after his arrival in Perry County, Missouri as one of the members of the Gesellschaft, Christian Adolf Bergt married Caroline Louis Voelker.  That marriage was one of the first marriages to be included in the books of Concordia Lutheran Church in Frohna.  The story of this couple was told in the post, Memorial Cabin.  Here are pictures of those two taken later in their lives.

That couple had 6 children who were all likely born in the cabin that is now the centerpiece of the Saxon Lutheran Memorial in Frohna.  The story I will share today is that of the last child born into that family.  His name was Julius Gustav Bergt, and he is today’s birthday boy, born on July 11, 1855 and baptized at Concordia, Frohna.  Below is an image of his baptism record.

Julius can be found in his first census in 1860 at the age of 5.  The Bergt surname was really butchered by the census taker, who was probably someone who only spoke English.

Next, we find Julius as a teenager in the 1870 census.  The entry spills over two census pages.

Now, we will take a look at the future wife of Julius.  Her name was Emma Noennig.  She was born on August 25, 1857, the daughter of Gottfried and Johanna (Poppitz) Noennig.  Emma was baptized at Trinity Lutheran Church in Altenburg.  Here is an image of her baptism record.

Like her future husband, Emma’s parents were both members of the Gesellschaft and married shortly after arriving in Perry County.  The Bergt’s, Poppitz’s, and the Noennig’s had all come to America aboard the Copernicus.

Emma is found in her first census in 1860 at the age of 3.  Emma was not the last child born into her family, but she was number 8 out of 9.

On October 25, 1877, the young man from Frohna, Julius Bergt, married the young lady from Altenburg, Emma Noennig.  The marriage took place at the church of the bride, Trinity, Altenburg.  Here is the church record for that wedding.  Someone has made a notation in English that this was a Bergt marriage.

We can also view the civil marriage record from Perry County.

Let me insert here an historic note.  After several years of Rev. J.F. Koestering serving both Trinity, Altenburg and Concordia, Frohna, Concordia decided to call their own pastor in 1877.  His name was Rev. C. Hochstetter.  If this wedding would have taken place at Concordia, Rev. Hochstetter would have performed the ceremony.  There was also another pastor in the area who might have been considered as a pastor to perform this marriage.  Julius’s uncle, Rev. Adolf Bergt was the pastor at Grace Lutheran Church in Uniontown in 1877.  The marriage took place on a Thursday, so I am thinking that Uncle Adolf was likely in attendance at this wedding.  He may also have been asked to assist.

Julius and Emma had 6 children.  One of them died at the age of 3 as a result of diphtheria.  We find this couple in the 1880 census with their first child.

Julius’s older brother, another Adolf, got married in 1870, and he would take over the farm located where the Saxon Lutheran Memorial stands.  Julius would end up farming a piece of land farther east which could said to be located between Frohna and Altenburg, a little bit north of each of those places.  The plat maps made later in 1915 show where this farm was located.

I think this farmland is already where Julius and his family lived when the 1880 census was taken.  It would be 20 years after that census before we can view them in another one.  Here is the entry for the 1900 census.

The 1910 census shows Julius and Emma living with their son, Gottfried’s, family.  Gottfried had married Emma Mueller in 1905, so there were two Emma Bergt’s living in this household.

The last census in which we find Julius Bergt was the one taken in 1920.  He and his wife had an empty nest.

Julius Bergt died in 1921 at the age of 65.  His death certificate mentions diabetes as a cause of death.

In the 1930 census, we find Emma Bergt living near Gottfried’s family once again, but this time Gottfried was the proprietor of a hardware store, and they probably lived in the village of Frohna.

The last census for Emma was the one taken in 1940.  It shows a similar situation, except this time Gottfried was shown as the janitor at a private school.  That must have been Concordia Lutheran School.

Julius and Emma Bergt are both buried in the Concordia Lutheran Cemetery in Frohna. 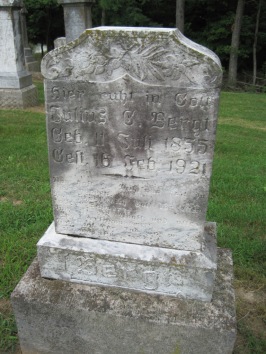 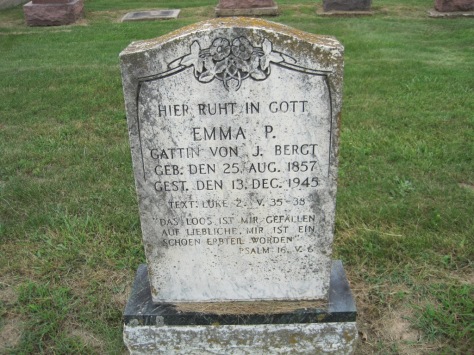 As near as I can tell, there are no more individuals still living in East Perry County that carry either of the surnames, Bergt or Noennig.  They once were very prominent names to be found in both Frohna and Altenburg.  I personally know several full-time Lutheran church workers who carry this surname to this day.  I know that quite a few congregations all across this country can say that there were Bergt’s or Noennig’s that influenced them over the years.