Heinrich Gotthilf Kaufmann is our birthday boy today.  He was born on August 4, 1852, the son of George and Regina (Goethe) Kaufmann.  His father, George, was a teenager when he arrived in Perry County as a member of the New York Group in 1839.  His parents were married not long before Rev. Gotthold Loeber’s death in 1849.  There were 9 children in that Kaufmann family and 8 of them were boys, guaranteeing plenty of descendants with the surname, Kaufmann.  Henry was baptized at Trinity Lutheran Church in Altenburg.  Below is his baptism record.  Two prominent names are listed as sponsors.  One is Hartmann Grebing, another member of the New York Group, and the other was Dr. Ernst Eduard Buenger, who was probably the only doctor in Altenburg at the time.

Now, we turn our attention to Henry’s future wife, Pauline Bodenschatz.  She was born on July 26, 1859, the daughter of Erdmann and Christiana (Wachter) Bodenschatz.  Pauline was baptized at Immanuel Lutheran Church in Altenburg.  Here is her baptism record.

When the 1860 census was taken, Pauline was quite young.  She was shown as being 10 months old.  Her father was a blacksmith.

On October 10, 1878, Henry Kaufmann married Pauline Bodenschatz at Trinity Lutheran Church in Altenburg.  Their marriage record is found in the church books for that congregation.

The civil record for that marriage shows that it was Rev. J.F. Koestering who performed the ceremony.

This couple shows up in the 1880 census.  They would have their first child later that year.  Henry was a farmer all his life, just like his father.

According to our German Family Tree, this couple had 8 children.  All of those children were born before the next census that we can view which was taken in 1900.  However, several deaths took place during that time interval.  The first 3 children born into this family died in 1888 and 1889.  All of them died of the same cause.  They all died of diphtheria.  Then, in 1896, another child died of encephalitis.  All 4 of these children died before they reached the age of 10.  So, only half of the 8 children lived to adulthood.  Needless to say, there were plenty of Kaufmann kinder (German for children) casualties in this family.  Right after that last child died, Pauline gave birth to a set of twins, a boy and a girl.  That pair would be the last children born into this family.

The 1900 census showed the Kaufmann family with the remaining 4 children.

Henry Kaufmann died in 1909 at the age of 56.  He died one year before Missouri started recording death certificates.  Pauline shows up as a widow in the next census that  was taken in 1910.  By that time, her daughter had married Rudolph Popp, and he is shown living in this household and working as a farmer.

We find a parcel of land in the name of Pauline Kaufmann when the plat maps for Perry County were produced in 1915.  That land was located south of Altenburg, almost to the Apple Creek.

The 1930 census shows Pauline living in this Kaufmann household.  Adolph had married Ada Weinhold in 1926.  I am guessing that Pauline was enjoying the opportunity to be around a few of her very young grandchildren.

The last census in which we find Pauline was the one taken in 1940, where we find her at the age of 81.  Six of her grandchildren can be seen in this entry.

Pauline Kaufmann died in 1948 at the age of 88.  Her death certificate is shown below.

Both Henry and Pauline Kaufmann are buried in the Trinity Lutheran Cemetery in Altenburg. 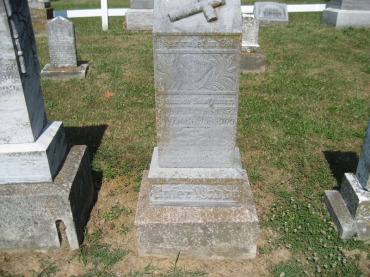 The Henry Kaufmann family gives us another illustration of the fact that in past years there were circumstances that were so much different than they are nowadays.  First,  many families included so many more children than we see in today’s families.  Second, the death rate, especially among children, was also quite high.  Finally, I think it is fair to say that elderly grandparents in today’s day and age are not found living in the same households with their grandchildren as often as they once were.

After posting this story yesterday, Connie Roth Kuchar shared a few photographs on our Facebook page.  They are such wonderful images.  I am going to include them now in a gallery.  Click to enlarge.