May 27, 1873, was the wedding date for a couple whose parents spent some of their early time after the immigration in Perry County.  Both of the groom’s parents and both of the bride’s parents spent those early years in and around Altenburg.  The groom was Ferdinand Gerhard Walther and the bride was Bertha Emilie Biltz. 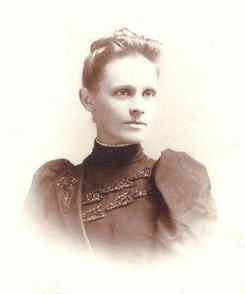 Rev. Biltz and his wife, Maria (Wurmb), were both students in the first class at the Log Cabin College near Altenburg in 1839.  Rev. Biltz was one of just five men who graduated from Concordia Seminary in Altenburg.  Bertha had become the step-daughter of Rev. Theodore Brohm, one of the builders of the College, after he married Bertha’s mother, Johanna Wurmb.  Bertha was the second child of the Biltzes and was born in the town of Dissen (Friedheim), MO, where her father had received his first call.  After then spending some time in Cumberland, MD, Rev. Biltz took a call to a church in Lafayette County, MO.  Rev. Biltz also became the postmaster there and had the opportunity to name the town.  He called it Concordia, after his alma mater in Altenburg.

The other set of parents was living in St. Louis at the time of the wedding.  Ferdinand’s father, Rev. C.F.W. Walther, was serving for the second time as the President of the Lutheran Church-Missouri Synod when this marriage took place.  His wife, Emilie (Buenger) Walther was the daughter of Christiane Buenger, who owned the property where the Log Cabin College had been built.  Since Rev. Walther spent his first few years in Perry County and did some teaching at the College, and his future wife lived on the same property as the College, they both were certainly familiar with Franz Julius Biltz and Maria Wurmb.  Now the Walthers were witnessing their son, and the Biltzes were witnessing their daughter, getting married.  It must have been a very special day for all of them.  Certainly, the Walthers must have made the trip from St. Louis to Concordia, and it is likely that Rev. Walther assisted in the ceremony.

Ferdinand Walther also became a pastor and spent his entire ministry in Brunswick, MO, which is not that far from Concordia.  They both are buried in another Concordia….Concordia Cemetery in St. Louis.

Here is a selection of other photos of Bertha and Ferdinand at other times in their lives: (click on the thumbnail for a larger view)

Another story about Ferdinand and his twin brother,Constantine can be found HERE.