Sylvester Albano was born on October 23, 1910 in Ponza, Italy.  (I will pause to point out that this is not the first post we have published about someone born in Italy.  There was this:  An Unexpected Luigi.)  Sylvester came to America in 1920 aboard the Presidente Wilson.  At that point in his life, he went by the name of Silvario.

When he arrived in America, his family ended up settling in Crystal City, Missouri.

Now we must go back to East Perry County to set up the rest of the story.  If you a follower of this blog, you will recognize the name Wagner and its connection to the Palisch family and the Wagner Hotel that once was operated in Altenburg.  One of the Wagner boys that was born to Gustave and Theresa (Palisch) Wagner was Samuel.  Samuel was one of the boys who was involved in an altercation which took place in Altenburg that resulted in a man’s death.  He would later marry Margaretha Sommer from Apple Creek.  This couple would have a daughter by the name of Edna (Etna).

Here is where we run across one of those amazing events that probably occurred more in East Perry County than in most other places.  A Wagner married a Wagner.  Edna Wagner married Henry Wagner at Concordia Lutheran Church, Frohna, Missouri, in 1913.  Henry was the son of John and Caroline (Fassold) Wagner.  John was a blacksmith.  Even more amazing to me is that the officiating minister was Rev. Wenger.  That’s right:  A Wagner and a Wagner get married by a Wenger.  I wonder if they had chicken wings at the reception.

This couple had several daughters, one of which was named Lillian.  This Wagner family moved away from Perry County.  As near as I can guess, Henry found work in Crystal City, Missouri in a glass factory.  By this time, the big glass factory was owned by the Pittsburgh Plate Glass Company (PPG).

Here I have to digress a little bit.  It seems every time I do research for one of these posts, I learn something new.  I grew up in Missouri and have always heard about Crystal City.  However, I never knew this town got its name from the fact that it was a “company town” which began when a glass factory was established in that location.  You can find an interesting article about the history of Crystal City here:  http://www.communityalmanac.org/CrystalCity-MO/pics-HistoryofCrystalCity

Here is a photo of the PPG Glass Works Plant #9 in Crystal City.

Maybe you have the rest of the story figured out by now.  Sylvester Albano married Lillian Wagner in 1941.  Here is their marriage record. 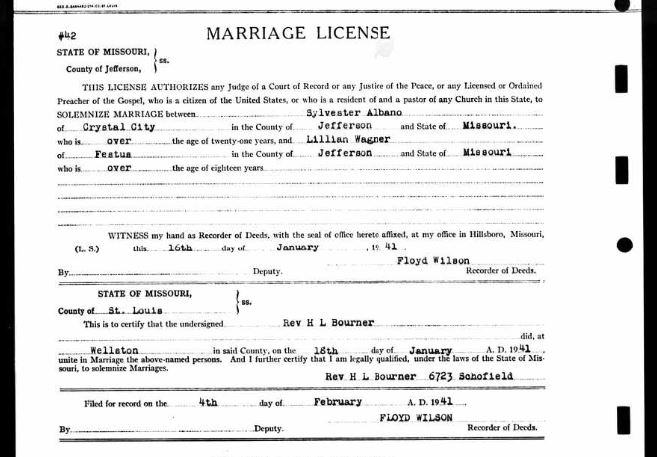 Sylvester died in 1967, and Lillian died in 2012.  They are both buried in the Rose Lawn Memorial Gardens in Crystal City, Missouri.

One thought on “Italian Glass”