One hundred twenty-nine years ago today, Sarah Mathilda Poppitz, known as Tillie, was born.  She was baptized eleven days later on Reformation Day in 1888.  Tillie’s parents were Carl Ferdinand and Ernstine (Oehlert) Poppitz.  She was the fourth child born into this family.  Unfortunately, two of those children died at very young ages.  Amazingly, one child died on Christmas Eve, and the other died on Christmas Day, in 1887.  Christmas must have been a difficult holiday for this family for many years.  Here is a photo of this Poppitz family.

Tillie is standing in the back row on the far right.  Here is another photograph of today’s birthday girl.

In 1910, when Tillie was 22 years old, she married Gottfried August Degenhardt, Jr., also known as Gust.  He was the son of Gottfried August and Bertha (Engert) Degenhardt.  Tillie and Gust were neighbors because both the Poppitz and Degenhardt families lived in the Seelitz area.  Here is their wedding photo.  It is another example of a bride wearing a dark dress with a white veil.

Gust and Tillie had four children.  We can see all four in the 1930 census.

In 1918, Gust completed his World War I draft registration.  On it you can see that the Seelitz area was shown with a Wittenberg address.

Two of Gust and Tillie’s children died in recent years so I was able to find some photos of them in their obituaries.  Reinhold (everyone called him Dixie) is on the left and Paula (Degenhardt) Holt is on the right.

Another son, Wilmar, is still alive.  He often visits us in our museum.  He is a wonderful man who is a great Perry County historian himself.

When one of Dixie’s sons was married in 1964, this photograph was taken of Gust and Tillie outside of Concordia Lutheran Church in Frohna. 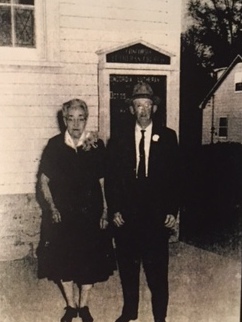 Gust died in 1966; Tillie died in 1981.  They are buried together in the Trinity Lutheran Cemetery in Altenburg.  Here is their gravestone.

At a recent Degenhardt family gathering, a photograph was taken of the four boys in Dixie’s family at the old homestead.  There was also one girl, Connie, in this family.  You can see the Degenhardt house in the background.

I cannot finish this post until I also mention that it is Lynn Degenhardt who is the creator of our German Family Tree.  It is now up to 2690 pages and still growing.  Here is a photo of the four binders that hold it, and a segment of it that shows information on Gust and Tillie. 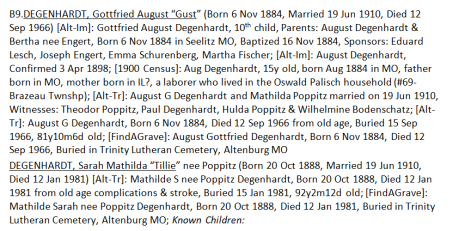 Without this terrific resource in our museum, I don’t think I could write a daily blog post.  I’m sure that Grandpa Gust and Grandma Tillie would be proud of their grandson’s work.  If you have not been to our museum to look at the German Family Tree yet, you really ought to stop by and see it.

In searching for a story for June 19th, I ran across a fact that led me to share this Degenhardt story today.  The wedding of Gust and Tillie Degenhardt took place on June 19, 1910.  Although there are other dates sometimes used for the beginning of the Father’s Day tradition, there is one in particular that mentions the first Father’s Day in America occurring on June 19, 1910, the same days as the Degenhardt wedding.  This segment from an article on Wikipedia gives some details about the history of Father’s Day.

Three of the 4 Degenhardt brothers shown above who are grandchildren of Gust and Tillie are now fathers and will be honored today by their families.  Lynn Degenhardt, although he is not a biological father, could easily be called the “Father of the German Family Tree”.  He is the author of the huge document that enables me to do what I do on this blog.  All of these men are fantastic supporters of the Perry County Historical Society.  We could not do what we do at the museum without them.

I often think about the amazing fathers that show up as leaders of their families in the stories that I write on this blog.  They are an inspiration to me as I attempt to be a Christian example for my family.  We at the museum would like to honor all the fine fathers that are readers of this blog by saying, “Happy Father’s Day.”

3 thoughts on “Gust and Tillie – A Father’s Day Edition”