If the question asked in the title is answered “Yes”, then I can point out two events that took place on December 29th in this family line.  I find this story especially interesting because I think it gives evidence of a family ending up in Perry County that arrived in America before the 1839 Gesellschaft arrived on the scene.

First, let’s take a look at the passenger list for the ship, Weser, which Ancestry.com says arrived in New Orleans on December 29, 1826, thirteen years before the Gesellschaft arrived.  This family had lived in Sudheim, Germany.

Thanks to some input from my friend, Clayton Erdmann, we discovered on another website that this date for the ship’s arrival was not in 1826.  Instead, it probably arrived on December 29, 1835.  That is still three years before the Gesellschaft ships arrived in New Orleans and about four years before the Gruber Group arrived at the end of 1839.

A Hornemann family is shown here, with 36 year-old Heinrich Christian as the father.  His wife, Elizabeth, is shown to be 31, and there are three children. It looks as if Henry must have died sometime before 1839 because on March 24, 1839, Elizabeth married Christian Martin in Cape Girardeau County, Missouri.  We have this marriage record.

There seems to be some discussion among folks on Ancestry.com about the possibility the Hornemann name was actually Hemmann.  I do not think this is the case.  After Christian and Elizabeth were married, they had a child by the name of Louise Martin.  She was born on January 25, 1840.  When this girl was baptized at the Uniontown congregation, it says Elizabeth had the maiden name of Kasten.  Now we get to the question, “Was Elizabeth Martin….also Elizabeth Hornemann….also originally Elizabeth Kasten?  And if she was, was she also related to the other Kastens in Perry County.

Clayton Erdmann sent me a Kasten genealogy that had the following information.  I do not know how reliable it is. 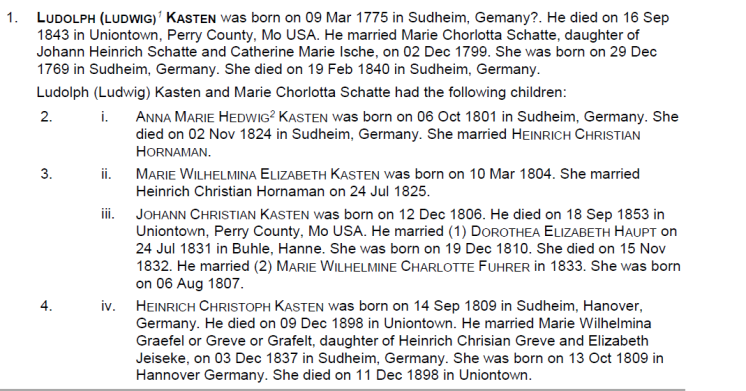 This states there was a Marie Wilhelmina Elizabeth Kasten born in 1804 and married Heinrich Christian Hornemann on July 25, 1825.  Now that we know the Weser arrived in 1835, the children’s names on the passenger list make sense.  The fact that this information says that both Elizabeth and her older sister, Hedwig, married Heinrich Christian Hornemann has to be wrong.  This genealogy also gives the patriarch’s name for this family….Ludolph Kasten.  We have a Rudolph Kasten in our German Family Tree who was born in 1775, died in 1844, and buried in the Grace Lutheran Cemetery in Uniontown.  However, we do not have him connected to the rest of the Kastens on this list.  At least, not yet.  Lynn Degenhardt may have another job to do.

The 1850 census shows another interesting situation.

At the top of this image you see the Henry Kasten family, and at the bottom, you see the Martin (spelled Martyn) family.  I think we can now safely say that Henry Kasten and Elizabeth Martin were siblings.  Please note that the Caroline shown in the Martin family was born in Germany.  She was almost certainly not Caroline Martin, but Caroline Hornemann, the baby shown on the passenger list.

Next, we will follow the line of Louise Martin, the first child of Christian and Elizabeth Martin.  One place in our GFT says that she married August Sims.  That is incorrect.  Take a look at this marriage record for a wedding that took place on October 21, 1858.

I think you can see why the last name of the groom might be Sims, but it is actually Leine.  August Leine arrived in America in 1855 according to the 1900 census which shows the date of immigration.  Three years after marrying Louise, August went off to serve time in the Union Army in the Civil War.  Here is a record of his service.

Our German Family Tree lists 8 children born into this Leine family.  Around 1870, the church records for members of this family can be found at Immanuel Lutheran Church in New Wells, Missouri.  That corresponds with the fact that August can be found as a saloon keeper in Cape Girardeau County in the 1870 census.

I’m going to return to Elizabeth Martin for a moment.  The last census in which we find her was the 1880 census for White Water Township in Cape Girardeau County.  She was living with another son.

Meanwhile, we find the Leine family living in Shawnee Township in that 1880 census.

A daughter had been born in 1873 by the name of Elizabeth.  She may have been named after her grandmother.  She is the next line we will follow, mainly because her birthday was December 29th.  On July 26, 1900, she married Gottfried August Herman Braeuner, who was from Wittenberg.  They were married at Immanuel Lutheran Church in New Wells.  This couple lived on The Ridge outside Wittenberg.  This 1920 census shows this Braeuner family with several children.

A fairly recent post was written about several children in this family.  It was titled, A B/W Wedding.

In the process of doing the research for this post, I contacted Clayton Erdmann.  I think we both ended up finding information from each other.  I found some things that Clayton may not have known, and he showed me things that I did not know.  I guess we make a pretty good team.  Clayton tells me he is about to start working towards a master’s degree.  I certainly hope he doesn’t use that as an excuse for not contributing to this blog in the future.