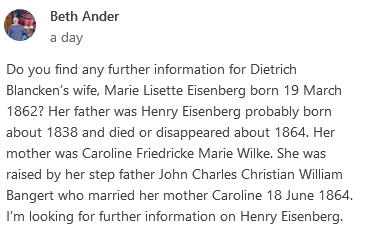 It just so happens that September 1 is a day that is significant in the Dietrich Blancken family.  On September 1, 1878, Dietrich’s first wife, Magdalena (Eggers) Blancken gave birth to a set of twins, Ana Margaretha and Magdalena Catharina.  It was also the day when his wife died as a result of that childbirth.  Ana died on September 11; Magdalena died on September 16.  Those deaths left Dietrich all alone.  A few years later, on November 11, 1880, he married Marie Louise “Lisette” Eisenberg, who is mentioned in the above comment.

I found a few documents concerning these events.  First, here are the three consecutive death records found in the books of Concordia Lutheran Church in Frohna, Missouri.

By the way, sometimes I see this surname spelled Blanken or even Blank.  I choose to be consistent and use the Blancken spelling all the time.

The marriage of Dietrich Blancken and Lisette Eisenberg took place at Trinity Lutheran Church in Friedheim, Missouri.  Here is an image of that church record.

However, who is this Marie Louise Eisenberg?  At this point, I am going to just tell you that this Eisenberg story gets very confusing.  I have not figured it out yet.  I will just tell you some of the things that I have found.  First of all, in different family histories that can be found on Ancestry.com, there are two different fathers identified for Marie.  One is Henry William Friedrich Eisenberg, who most agree was born sometime around 1839, and the other is Johann Carl Friedrich Eisenberg, who was supposedly born around 1840.

I did find a passenger list for a Henry Eisenberg family that came to America in 1847.  They were aboard the ship, Post, which landed in New Orleans.  The father of this Eisenberg family would not have been Marie’s father because he would have been born around 1800. 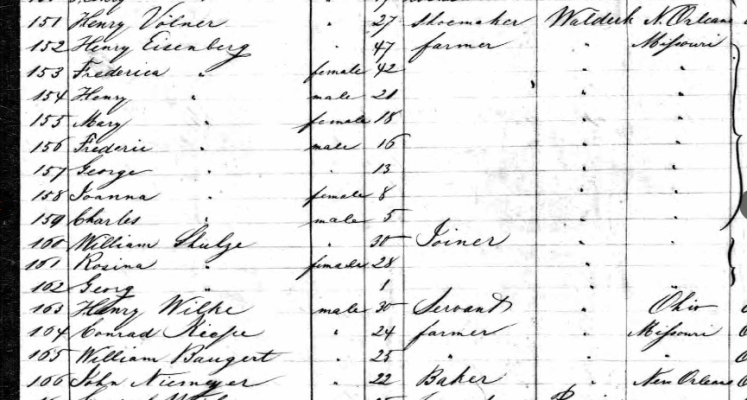 The ages of the two possible fathers of Marie do not match up very well with the others on this list.  However, what makes it interesting is that there were also some other surnames on this passenger list that are connected with the Eisenberg family and are names found in the Trinity, Friedheim church records.  Those names would be Bangert and Wilke.  All of these passengers were from Waldeck also, and there are other documents which show the Eisenberg’s being from that place.

Let’s take a look at the 1880 census which shows Marie Eisenberg earlier in 1880 before she was married.  She is found at the bottom of the Charles Bangert household and listed as an 18 year-old step-daughter.

If we backtrack to 1876, we find Henry Eisenberg in the 1876 Missouri state census.

Here is where we get to the phrase in the comment shown before that said Henry “died or disappeared”.  Henry appears to be alive and well and the head of a household in 1876, but if Marie is his daughter, she is called a step-daughter in 1880.

Add to this the death record I found in the Trinity, Friedheim books.

If we backtrack to the 1860 census, we find a Hy. (a common abbreviation for Henry) Eisenberg who was 34 years old and married to an Elizabeth.

On the same census page, we find Hy. Isenberg who is 60 years old.  He is likely the Henry Eisenberg from the passenger list of the Post.

At this point, I throw up my hands and say, “I give up.”  At least for today.  I happen to know that there are some people who are in the process of developing an index for the church records of Trinity, Friedheim.  Once that is done, and Lynn Degenhardt gets those records included in our German Family Tree, I may have more success at unraveling the Eisenberg dilemma.  So at this point, I am going to consider today’s efforts to be more or less an intelligence-gathering mission.  I will use the data I collected today to fight the Battle of Friedheim at a later date when I have more of a chance to win.  I hope Beth Ander can wait.

In the meantime, let me remind you that a previous post told the story of another Hy. Isenberg with the title, Isenberg in Wittenberg.  He ran a saloon in Wittenberg and was tied in with this whole mess. 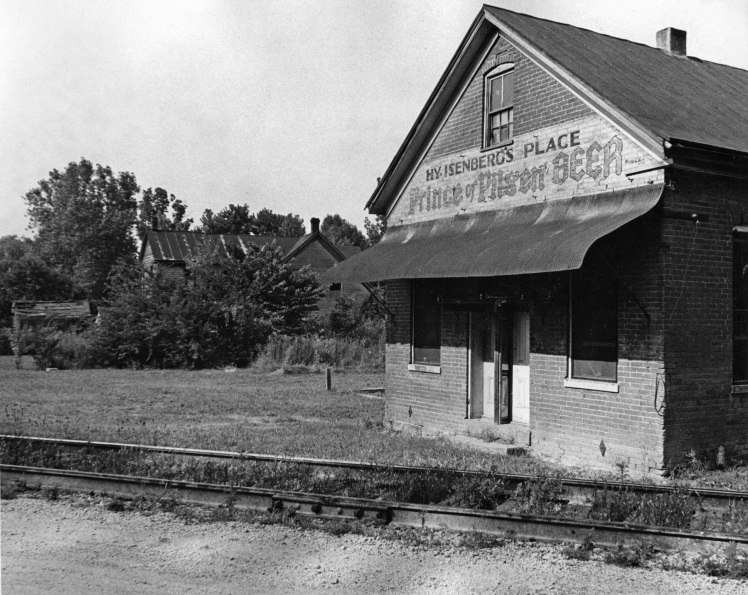