One might think that a story about a man who spends all his life being a farmer might not be worthy for telling.  First of all, if that was true, I would have to eliminate an awful lot of people from our list of East Perry County residents when I’m looking for subjects for this blog.  Secondly, in today’s case, I happened upon a family that is blessed with plenty of photos.  They also had some family members who took the time to write down some of the details of a farmer’s life for the edification of future generations. 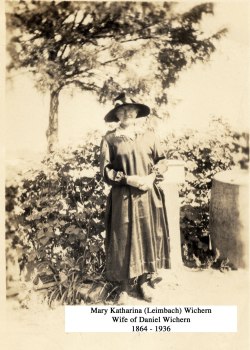 Claus was the firstborn child in this Wichern family.  The photo below shows the Daniel Wichern family when their children were still relatively young.  The photo also notes that they are at the house up on the hill.

If this photo is labeled correctly, Claus would have been 13 years old.  The year 1897 was also the year that Claus was confirmed.  Claus’s confirmation record is found in the books of Immanuel Lutheran Church in Altenburg.  Daniel Wichern ran a store as well as doing some farming, but, as I said before, his son, Claus, became a farmer.

On January 14, 1909, Claus married Sarah Seibel.  Sarah was the daughter of Conrad and Anna (Grother) Seibel.  She was baptized at Immanuel Lutheran Church in Altenburg.  Her baptism record and confirmation record say she was born on February 21, 1884, but her church death record and her Missouri death certificate say she was born on February 16th.  According to our German Family Tree, Sarah was the eighth child out of nine born into the Seibel family.

Claus and Sarah had six children, and in several sources, I saw it described that they lived in the home on a hill overlooking the Mississippi River.  On this 1915 land map, you can see that the Wichern property was located right on the river.

Here is a rather early photograph of the Claus Wichern family with a home in the background.  I may be wrong, but I think it is the “Home on the Hill”.

This next photo shows some of the family several years later, and it is taken in a place that appears to have the Mississippi River in the background.  I think they are standing near the railroad tracks that run next to the river.  The river would have been flowing from left to right.

Yet another photograph was taken later which included all six of the Wichern children.

One of the interesting aspects of this family’s story is the fact that some descendants made the effort to write down some of their family’s stories.  Here is an excerpt that I will place here to give you a glimpse of what kinds of stories have been told.

I am going to try something I have not previously done on this blog.  I am going to attach some Word documents for your reading pleasure if you would like to take the time to read some more of the stories which have been told about this Wichern family and their “Home on the Hill”.  You can click on the following links and open the documents in Microsoft Word.  The really good stories are not found in my writing today.  The really good stories are in the stories told in these documents.  By reading them, you will get a good idea what it was like to live on The Ridge during the early days of the 20th century.

Claus died in 1948; Sarah died in 1953.  They are buried together in the Immanuel Lutheran Cemetery in Altenburg.  Here is their gravestone.

In closing, I would like to offer a few encouragements.  First, I would encourage you to identify old and new photographs you may have of your family.  Way too many photographs never get identified, and in future generations, no one is left who knows the people in the photos.  Secondly, a family would do well to find someone who would take on the task of writing down any family stories that are told.  Future descendants and historians would be very grateful for such documents, such as the ones found in this story.  And while you are at it, if you have roots to our area, donate some of those old, identified photos and stories to our museum, so we can share them with future visitors.

2 thoughts on “The Wichern’s Home on the Hill”